Welcome to kindergarten! I’m so excited to spend the year with your child and can’t wait to get to know your family.


This will be my 14th year teaching and I’ve spent the last 7 years at UP. Throughout my career I’ve taught in Dallas ISD, Arlington ISD and Birdville ISD. My teaching experience ranges from kindergarten thru second grade. I received my Bachelor’s Degree from Texas Tech University. I earned my Master’s degree in Teacher Leadership with a specialization in Autism from Lamar University. I grew up in Bellville, a small town outside of Houston.


I’m the oldest of three siblings. I have a younger sister and brother. My husband Josh and I have been married for 12 years and are proud parents to our four year old daughter Mila, and little sister, Maxwell. In between soccer games and dance classes, my family and I love to travel and explore new restaurants in Dallas.


As an elementary teacher, my goal is to treat each student as if they were my own. The University Park Elementary community is the absolute best and I'm proud of be a UP Panther. I’m so excited to have your child join me this year in kindergarten! 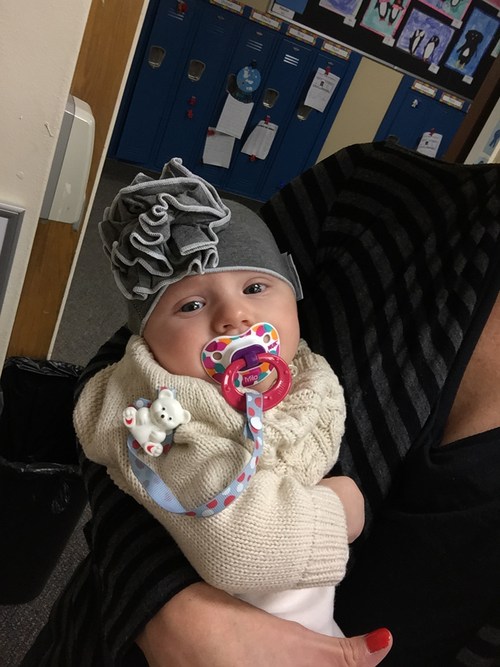 Miss Mila helping me get ready for school in the morning. :) 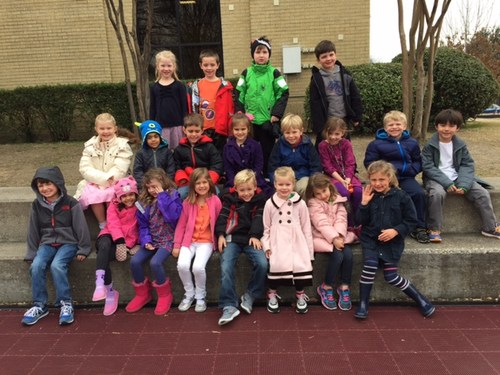 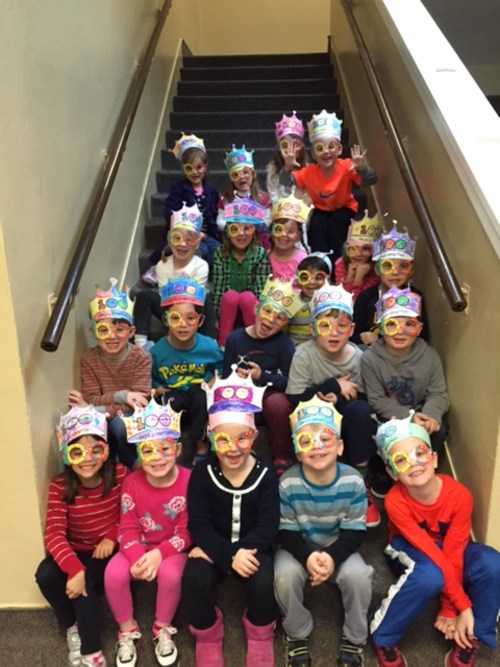 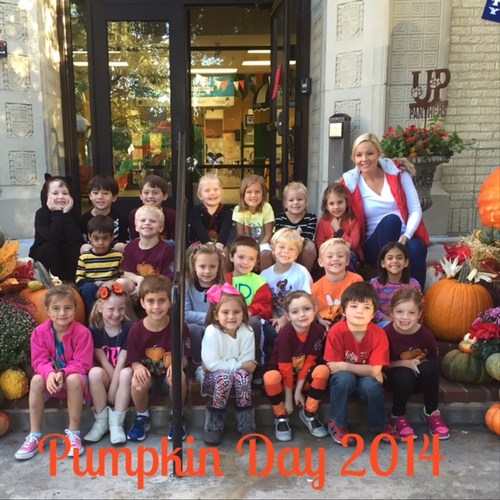 Thursday, October 16 - PARENT CONFERENCES in Literacy Library. Please note these conferences will be brief and will not last longer than 15 minutes as we are operating on a tight schedule. If a more in depth conference is needed, we will schedule it then.

Friday, October 17 - UP Cafeteria will serve sandwiches or students may bring a sack lunch from home.  We will be eating in the classroom or outside if the weather permits.  No parents or guests at lunch.

The UP Elementary Father Son Breakfast is this Wednesday, September 17th on the UP Elementary Sport Court from 7:15 a.m. to 7:50 a.m. There will be breakfast, raffle prizes, and a special appearance by members of the HP football team!

You can help us be lunch tag free by making sure your child has learned his or her lunch number! The sooner they learn their number, the sooner they can be done with the pesky necklace at lunchtime. :)

Don't have a shirt? The Spirit Shop is open every Friday morning for you to shop away! 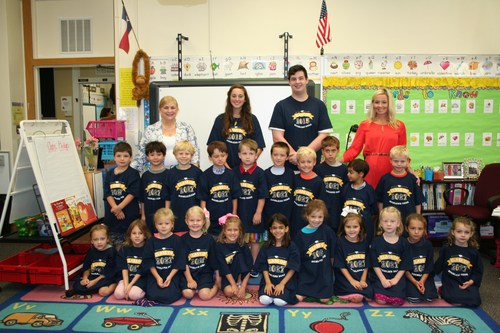 This year's seniors came came to visit the class of 2027 on their first day of kindergarten!

We had an awesome first day of kindergarten. The kids did GREAT! They were so excited and constantly asked, "What's next?!"

A couple of reminders:

Please make sure you've turned in your parent contact information to me so that I can complete our class email list as soon as possible.

Tennis shoes are the best choice for shoes each day. Even if we don't go to the gym one day, they will still be outside on the playground running around. Sandals and other shoes tend to create blisters, problems, etc.

If your child gets cold easily, you may want to send a sweater or jacket with them to keep in their locker in case they need it.

Please keep the Navy HP Class of 2028 shirt in a safe place. They will need to wear it to field trips later in the year.

Please help us transition smoothly in the cafeteria, by helping your child learn his or her 3 digit lunch number. For now they are wearing necklaces, but the goal is to have each child memorize their number so that the necklaces are no longer necessary. 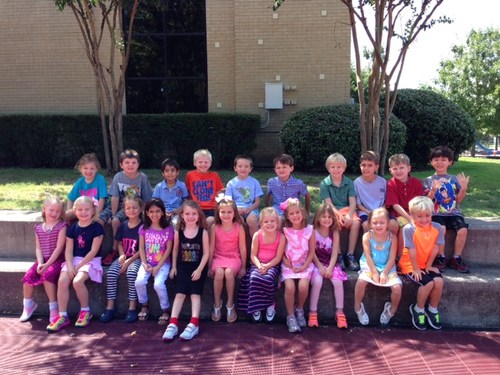 We had a super first day of kindergarten.

Twas the Night Before Kindergarten

Greetings parents! Tomorrow marks the beginning of another school year. We're going to have a fantastic year in Room 102 and I am so thrilled your child is in my class. I hope to use this blog as another form of communication as well as to keep you informed about what we are doing in class. Be sure to SUBSCRIBE so that you receive updates as I post them.
Until then, I'll leave you with this...

Twas the Night Before Kindergarten

Twas the night before kindergarten and as they prepared,
kids were excited and a little bit scared.
They tossed and they turned about in their beds,
while visions of school supplies danced in their heads.
Erasers and crayons and pencils galore
were stuffed in their backpacks and set by the door.
Outfits were hung in closets with care,
knowing that kindergarten soon would be there.
In the morning it came , school starts today!
Would the teacher be nice? Would they still get to play?
Faces were washed, and teeth were brushed white;
Kids posed for pictures with eyes sparkling bright.
Parents packed snacks and kids hopped in cars.
As if they were boarding a spaceship to Mars.
Some kids brought blankets or their favorite stuffed bear;
In hopes they could nap like they did in day care.
Their parents exclaimed: You’re big kids, “WOW!”
Let us hold your bears and blankies for now.
The parents were worried their children would cry
if they left them at school with just a good-bye.
So they told their darlings,
If you want, we can stay
and make sure that everything will be A-okay.
The teacher then greeted each one with a smile,
and invited the students to stay for a while.
The room was all filled with toys, books, and maps,
but where were the beds for midmorning naps?
They colored and painted and played Simon Says,
then tumbled and skipped and stood on their heads.
They sang silly songs from beginning to end.
Within just a minute, each kid had a friend.
The children were happy. They loved Miss Sunrise
It was she who was in for a giant surprise.
When what to her wondering eyes should appear
but sad moms and dads who were holding back tears!
Their noses so sniffly! Their eyes red and wet!
This was the saddest good-bye Miss Sunrise had seen yet!
She gathered the grown-ups on the magical rug,
then sent them away after one final hug.
The children all waved from the door of the school.
Don’t cry, Mom and Dad; kindergarten is cool!

It's time to say, "Good-bye."
Our year has come to an end.
I've made more cherished memories
And many more new friends.
I've watched your children learn and grow
And change from day to day.

I hope that all the things we've done
Have helped in some small way.
So it's with happy memories
I send them out the door,
With great hope and expectations
For what next year holds in store.

It has truly been a pleasure watching your children grow and learn all year. We have made exponential strides and I anticipate even greater things to come from your child as they enter first grade. Thank you for all of your support and hard work this year. We couldn't have done it without YOU.

Have a wonderful summer! 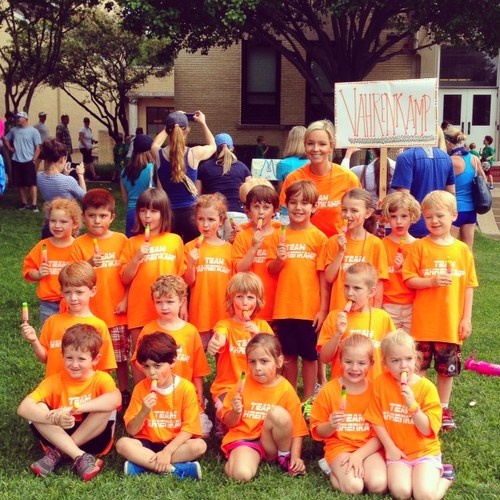 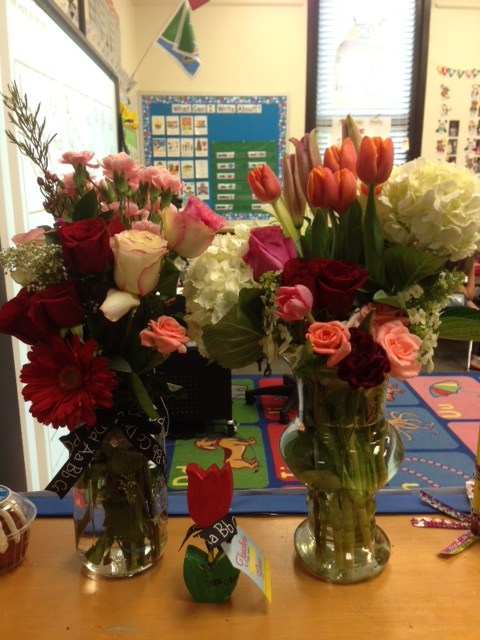 Beautiful blooms from everyone! Thank you so much, they are gorgeous! 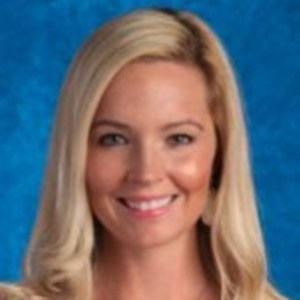 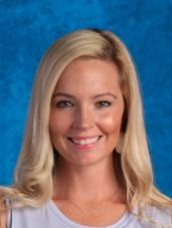 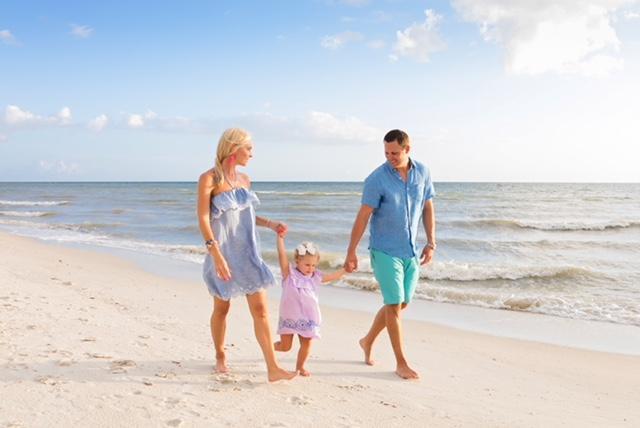